How We Set Up a Broadcast for 25,000 Viewers Using the SRT Protocol

From the 23rd to 25th of September, Nizhny Novgorod hosted the CIPR 2020 conference. The conference brought together more than 3,000 participants from 14 countries offline and more than 25,000 online viewers.

To organize the broadcast, it was necessary to capture video that came directly from cameras in conference rooms to the vMix playout (broadcast generation system). There was a lot of content that had to be broadcasted simultaneously and had to take place live and without delays.

Flussonic Media Server implements the SRT (Secure Reliable Transport) protocol for such tasks. This protocol is designed on the basis of UDP specifically for real-time video transmission without loss and with minimal latency. In addition to the high reliability of data transmission, SRT has a number of other advantages. It boasts an efficient retransmission mechanism for packets, support for the H.265 video compression standard (HEVC), and the use of the AES encryption algorithm. SRT is an open-source solution and now many vendors use it, adapting it to their needs.

How the Broadcast Was Implemented

Using SRT, we took the video signal from the playout, recorded it in a reliable archive, converted it, and delivered it to the final platforms. We deployed our local server at the exhibition, where the archive was recorded. It was required in order to avoid the slightest loss in transmission over the public Internet, which very well could have occurred. Conferences tend to have a lot of viewers and the quality of the internet signal often suffers in crowded places as all attendees use public Wi-Fi. Therefore, those tasks where reliability and connectivity are especially important are best performed locally.

The transcoding task was solved by a server deployed in Amsterdam. It converted the video stream from the playout from 8 Mbps to 4. This was required in order for users to be able to watch the broadcast from mobile devices via 3g / 4g (today, not all mobile devices are capable of playing a stream with a bitrate of more than 5 Mbps). Then, the signal was sent to the broadcast server, which delivered it to the end users.

Instead of a rented delivery server, we could have used a CDN (Content Delivery Network) for broadcasting, but in the first case, the cost of renting a server was only about $ 90 for three days of broadcasting, and in the second, it would have been several hundred dollars.

The conference was watched online by 25,000 viewers from 14 countries. The simultaneous peak load was 2,000 users. The organizers did not initially expect such a large number of viewers, but the wide public interest in the event increased the actual numbers of views.

Broadcasting achieved a very high level of quality, which was ensured by the presence of a local server storing the archive and using the SRT protocol, with which we will be able to continue to implement for these kinds of tasks in the future. 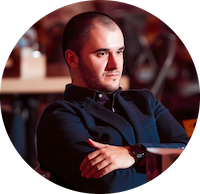